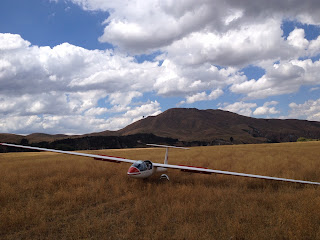 So with a great looking sky, probably one of the best of the week, I headed into the foothills of the Ruahine Ranges in ML, all too confident that the lift would be plentiful. Not so, and the 3,000’ on the altimeter was barely 1,500’ above the lower slopes. Very quickly the game was up and I was looking for landout options.

All went reasonably to plan, and although downwind with about 5 knots behind, the paddock was large and had a body of dry looking grass which offered a nice bit of drag on the undercarriage, and it was very slightly up hill. The landing roll was however a rougher ride than expected and went on a bit longer than I might have hoped.

Canopy off, and expletives out of the way, it was time to have a look around.

The first thing I noticed was rocks.... everywhere. Most scattered on the surface some embedded. They varied in size from cricket ball dimensions up to rugby ball size. They were spread about at approximately one metre intervals. I had to be grateful that I hadn’t damaged the glider. The general view is that I had landed in a dried out river bed.

The second thing to notice was this was a very isolated little spot.

With sporadic cellular coverage, communication with contest director John Etches was patchy, but good enough for me to let him know that the surface was, ignoring the grass, a bit moon like, and for him to let me know that access for a trailer looked very short on prospects. There followed a period of no cellular contact while I walked around to see if the rock count was less in other areas. Meanwhile back at base, pouring over Google maps and talking with tug pilots, it was decided to send the Citabria out with Ross Kent and Pawnee pilot Ron Sanders to size up whether the Pawnee could do a retrieve.

They circled overhead, and eventually landed a couple of paddocks north of me. It was a good choice, with fewer rocks, but enough to still play on the mind.

Together we sized up the best area to try and tow off and pushed the glider up to what would be the starting point for the take off. It was far from perfect, and as Ron and Ross left me, the best thing I could do was occupy myself with rock clearance. I would have needed all day to get sufficient rocks moved off to reduce the risks to an acceptable level. It kept going through my mind, that just one rock could upset the Pawnee or the glider. I had set up an old fence post to support a wing for takeoff, but I was racked with doubt that I could keep the wing from dropping. The cellular signal wasn’t playing ball and so I couldn’t communicate these concerns.

Fortunately, back at base, there was some thought going into things, and I was very relieved to see the Pawnee approaching in company with the Citabria. So, assuming they could both land safely, I would have a tow and a wing runner. I have to say I was uneasy watching the landing roll of both aircraft, I knew the further into the paddock they ran the more rocks there were. Both bounced around uncomfortably from a spectator’s view, but thankfully, Ron Sanders in the Pawnee and Neil Faulkner in the Citabria had made it through the landing.

Using a short tow rope, and with a bit of headwind, we managed to get the combination airborne more quickly than we might have hoped. Without Neil running the wing though, I just don’t think I would have wanted to risk it.

About 10-15 minutes into the tow back towards Waipukurau I was pleased to see the Citabria come alongside.

Undeterred, the next day I landed out again, which surprised some people....yeah right. Anyway that’s another story.

In case it is not obvious enough already, I am very grateful for everyone’s help on the day.
Posted by JMK at 20:49